Is PEMF Therapy Dangerous? Here's What The Research Shows...

As PEMF therapy is becoming more popular there are many new companies claiming to have the best PEMF therapy device. Many of these companies claim their PEMF devices are more effective because they are more powerful, many boasting about their machines producing several hundred Gauss.


The question is are these powerful machines more effective and are they even safe?
The short answer is no! Multiple studies prove more powerful PEMF devices using higher intensities (higher gauss levels) are less effective and in some cases are dangerous with the potential to cause harm. We will go over this conclusive evidence based on multiple published scientific studies that this is the fact.

Our Healthy Wave PEMF mats are designed with effectiveness and safety in mind based on what the scientific research has shown. This is why we have kept our features to only use the lower intensities (below 3 gauss) and lower frequencies (1-30Hz) as they have proven to be as or more effective then higher intensities and high frequencies while posing no unnecessary risks.

Units of measurement for PEMF devices

The “power” or “intensity” of the machines refers to the strength of the magnetic field they produce. The unit this is commonly measured in is Milligauss (mG), Gauss (G) and Millitesla (mT).
1000 Milligauss (mG)  = 1 Gauss (G)
10 Gauss (G) = 1 Millitesla (mT)
You can use this convenient calculator if you are having trouble with the conversions
http://www.convertworld.com/en/magnetic-field/gauss.html
Most commonly Milligauss and Gauss and for consistency purposes I only be using the measurement of Gauss.

There are thousands of studies on PEMF’s but most are individual case studies. Our team went through hundreds of studies looking for ones comparing different intensity levels under the same control group. There is a very limited amount available but they give us a lot of important information to understanding what PEMF intensity will be the most effective.
For example these are studies that compared the effectiveness of a PEMF at 1 Gauss to a PEMF 10 Gauss both against a control group.
This is an important aspect to look at as while both PEMFs may be effective one may be significantly more effective than the other. They can also tell us at what level PEMFs become ineffective and eventually when they can be detrimental.

The conclusion was while both PEMF intensities were effective the PEMF at 6 Gauss was significantly more effective.

“All intensity groups stimulated proliferation significantly with the highest effect at 0.6 mT.”

This is very clear that while both intensities were effective the lower intensity tested was more effective.

This study examined tendon cells using a PEMF at 15 Guass and 30 Gauss. The significance of testing tendon cells is it helps determine the effectiveness when using PEMFs towards people with chronic tendinopathy which is a degenerative process causing pain and disability.

The conclusion was while both intensities were effective but the lower intensity gave the best results.

“CONCLUSIONS: 1.5 mT-PEMF treatment was able to give the best results in in vitro healthy human tendon cell culture. “

While in this study the tendon cells were isolated form the human body it is still clear the lower intensity was more effective.

Evaluation of treatment by pulsed electromagnetic fields in a rabbit hyphema model.
http://www.ncbi.nlm.nih.gov/pubmed/12592054

This study tested the effects of higher intensity PEMFs, 100 Guass and 200 Guass, on rabbits in relation to wound healing and inflammation in the eye.

The conclusion was at 100 Guass the rabbits did heal in certain areas better but were identical to the control in others. While the PEMF at 200 Gauss there was an increased complication rate and resorption time.

“In the 20-mT group, the complication rate and the resorption time was increased versus the control group.”

While there was minor positive results using 100 Gauss the rabbits actually started experiencing negative effects with 200 Gauss. It should also be noted that the exposure time was very short in comparison to the majority of studies. We can draw the conclusion that at high intensity PEMFs can potentially be dangerous.
This should be very concerning as many of the PEMF devices on the market have much higher intensities then 200 Gauss.

“ CONCLUSION: These results demonstrate that long-term exposure to PEMF can lead to oxidative damage of the liver and spleen. “

In laymen’s terms this study looked at the bone formation during fetal development as it highly relates to the healing of bones which other studies have proven PEMFs to be effective for. This study compared PEMF’s with intensities of 10, 20 and 50 Gauss.

The conclusion was 10 Gauss PEMF was the most effective compared to 20 Gauss and 50 Gauss.

“only PEMF at 1 mT directed the differentiation of chondrogenic-induced stem cell pellets to the hypertrophic stage and promoted osteogenic differentiation.”

We can draw the conclusion that the lowest PEMF tested (10 gauss) was the most effective.

[Effect of pulsed electromagnetic field with different frequencies on the proliferation, apoptosis and migration of human ovarian cancer cells].
http://www.ncbi.nlm.nih.gov/pubmed/22616177

While this study does not specifically compare intensity levels of PEMFs it does debunk several myths relating to the intensity levels needed in relation to cancer, PEMF frequency and PEMF wave types. This study looks at the effects on ovarian cancer with a PEMF of 10 Gauss at frequencies of 8Hz, 16Hz, 32Hz and 64Hz using a sinusoidal wave.

The conclusion was 10 Gauss at 8Hz was the most effective in inhibiting the growth of ovarian cancer cells and killing them off. They already experienced a decreasing effect when the frequency was raised to 16Hz.This debunks several important myths.

“The data showed that exposure to PEMF of 1 mT, 8 Hz for 3 days could significantly inhibit the proliferation of SKOV3 cells and induce the apoptosis of the cells.”

Myth 1: When using PEMF to treat cancer you need a very high intensity and a higher frequency.
Fact: This study showed positive results at a relatively low intensity (10gauss) and found the lowest frequency 8Hz was the most effective.
Myth 2: Many companies claim their unique wave types are the most effective and many claim sinusoidal wave do not work.
Fact: This study proves a basic sinusoidal wave can actually stop cancer growth. Any type of PEMF will work as long as it is pulsed.

The conclusion was 15 Gauss was the most effective indicating diminishing returns when the intensity was increased to 20 Gauss. Additionally synthesis was significantly increased the longer the PEMFs were exposed.

“PEMF exposure significantly increased PG synthesis ranging from 12% at 4 h to 17% at 24 h of exposure.” “PEMF-exposed explants compared to controls, with maximal effect at 1.5 mT. “

Again we start seeing diminishing returns even at moderate increases of PEMF intensity.

Inhibition of proliferation of human lymphoma cells U937 by a 50 Hz electromagnetic field.
http://www.ncbi.nlm.nih.gov/pubmed/11936855

This study is examining at what point certain cancer cells (lymphoma U937)stop multiplying using PEMFs. A range of PEMF’s from 3 - 47 Gauss were tested.

The conclusion was at intensities greater than 25 Gauss inhibit the cell division of lymphoma U937 cells.

This is a very important as it gives us an understanding at specific intensity PEMFs start inhibiting cell growth. While this is a positive when looking at cancer, like in this study, you have to consider this is the point when PEMFs can actually start inhibiting the growth of cells and potentially killing them. Previous studies has shown higher intensities can cause damage to cells but this study gives insight at what intensity PEMFs start to do this.

This study examines different intensity of PEMFs in relation to bone growth on rabbits using dental implants. The study tested PEMF’s at the intensity levels of 2, 3 and 6 Gauss and measured the amount of newly formed bone around the implants after 1, 2 and 4 weeks.

The conclusion was after 2 weeks there was the greatest bone growth occurred from the PEMF’s at 2-3 Gauss compared to 8 Gauss.

This study is significant as the testing was done on live animals rather than cell cultures which the majority of studies are done on. We also see that even at low to moderate PEMF intensities, such as 8 Gauss, diminishing returns can start to occur.

These studies make it very clear that at a certain intensity PEMF’s become less effective and at a high enough intensity they can start having negative effects. It is difficult to figure out the perfect PEMF intensity due to limitations in the studies including.

We can draw some reasonable conclusion though.

It comes down to that using high intensity PEMF’s may have some benefit but are more likely to have little to no benefit, compared to lower PEMFs, and also carry the potential to cause harm. Since low intensity PEMFs are already proven effective there is no reason to have a home unit with high intensities.
High intensity PEMF’s only place should be under medical supervision when treating serious conditions such as cancer, leukemia, tumors and other very seriously ailments.

Another important fact to consider is the majority of the benefits of PEMF therapy surround regenerating and repairing cells. Study 8 showed at 25 Gauss PEMFs can stop cell division of cancer cells. While this is good if you want to stop cancer cells consider the fact it could slow down other cells to. This is supported by the fact that many of the studies show intensity levels at 25 Gauss and higher are less effective than intensities lower than 25 Gauss. At these higher intensities the regenerative and repairing benefits of PEMF therapy start to diminish.

What Intensity is best for PEMF Devices?

While there is no clear cut answer as every condition seems to benefit at different intensity levels we can determine an optimal range to use. Our conclusion is the ideal PEMF intensity should be less than 10 Gauss. We want to provide the most overall benefits, as explained earlier we cannot target specific tissues, so we want an intensity that provides therapeutic benefits at all levels. As previously stated the highest effective PEMFs intensities are at about 15 Gauss with many have optimal effectiveness at a few gauss or less. Lower intensity PEMFs (less than 10 gauss) are more beneficial and the research conclusively supports it. This is supported by Nasa who concluded “high  intensities are NOT more effective.  Low intensity, low frequency with rapid of rise and fall  (10 hz) wave forms heal faster”.

The Healthy Wave PEMF mats were designed based around this research and more. We only want to deliver you the most optimal PEMF therapy experience which is why all our PEMF mats have low intensities 0-3 Gauss and 1-30Hz frequency range. This range of intensities and frequencies provide you the ideal range for PEMF therapy. We do not include higher intensities or frequencies because they do not add additional benefits and as we can see based on the scientific evidence are likely less effective. 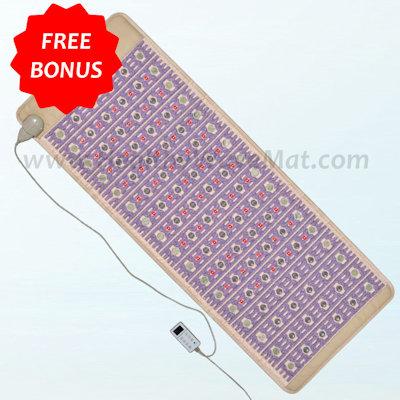 I love crystals, and being abl 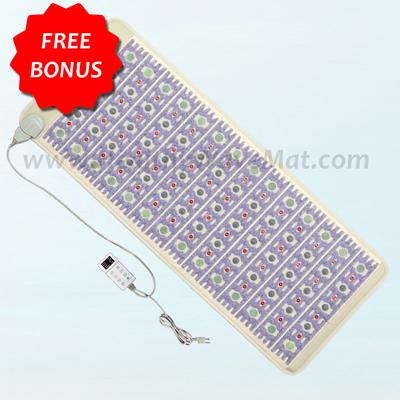 Dear Pamela-- I am so thrilled

Good Morning! After using the 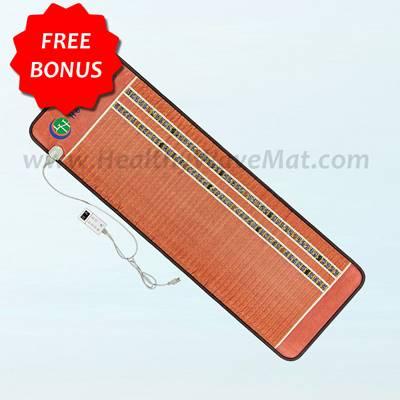 I have been using the Healthy

There currently are 18 guests online.